“Sitarski performed with intensity and gravitas, conveying both delicacy and power in his playing.”
Kitchener Record 2009 (R. Murray Schafer’s The Darkly Splendid Earth: The Lonely Traveller) 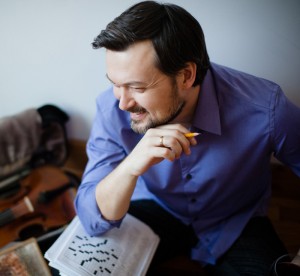 Stephen Sitarski enjoys a varied career as a violinist and musician.  During the 12/13 season, he will conduct both the Mississauga and Georgian Bay Symphonies.

Recently named in 2012 the Concertmaster of the Hamilton Philharmonic Orchestra, Stephen holds the same position with the Esprit Orchestra, and held the same position with the Kitchener-Waterloo Symphony (KWS) for 15 seasons (1997 – 2012).  During his tenure in K-W, Mr. Sitarski became Artistic Director of the KWS Baroque and Beyond.  Stephen has also been guest concertmaster across Canada and the United States, working with many distinguished conductors including Mstislav Rostropovich, Philippe Entremont, Raymond Leppard, Bramwell Tovey, and James Judd.  He has served as Associate Concertmaster of the Canadian Opera Company Orchestra, the Winnipeg Symphony Orchestra, and was guest concertmaster and featured soloist with the National Ballet Orchestra for Eugene Onegin and Russian Seasons in March 2011.

Stephen frequently appears as soloist with many concertos in the standard repertoire as well as concertos written especially for him by Canadian composers such as Kelly-Marie Murphy (Blood Upon the Body, Ice Upon the Soul, 2006 premiere with Kitchener-Waterloo Symphony) and Glenn Buhr (Violin Concerto, 2000 premiere with Kitchener-Waterloo Symphony).  Stephen is a founding member of Trio Laurier, formed in 2007 with cellist Paul Pulford and pianist Leslie De’Ath, and is a regular participant in diverse chamber groups and festival events nationally and internationally with many of Canada’s finest musicians.  He is also a frequent performer with Toronto’s acclaimed the Art of Time Ensemble and Soundstreams, with which Stephen completed a tour in May 2012 to Taiwan and China, performing works by Tan Dun and R. Murray Schafer.

As an arranger, Stephen has arranged music for the Emperor Quartet (over 20 arrangements of show tunes and popular songs), Quartetto Gelato (Octosca) and the Kitchener-Waterloo Symphony (Canadian and Italian national anthems).

Stephen was just awarded the Queen’s Jubilee Medal, a nomination submitted by the National Yourth Orchestra, where he is a faculty member.  Stephen is also on the faculty of Wilfrid Laurier University in Waterloo, Toronto’s Glenn Gould School of the Royal Conservatory of Music, and is a frequent mentor for Hamilton’s National Academy Orchestra.  He has taught at the Banff Centre for the Arts, was an instructor at the University of Manitoba, and has maintained an active private studio.